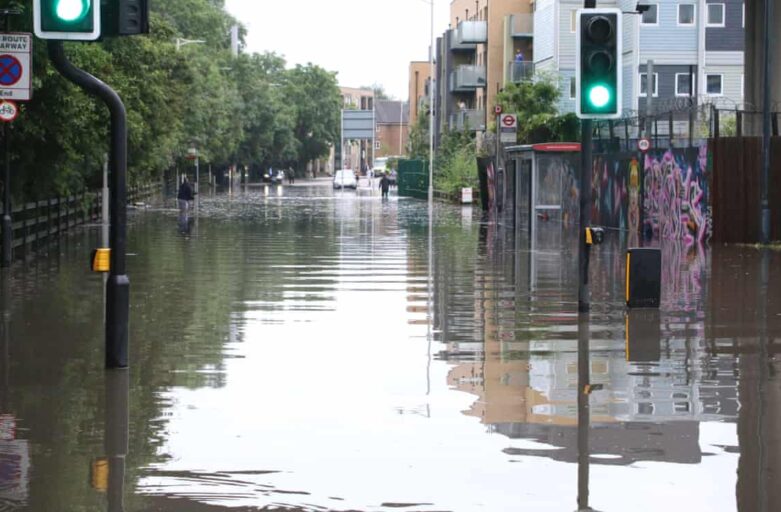 Future generations will look back on the climate events of 2021 and say: “That was the year they ran out of excuses.”

Heatwaves and flooding here in the UK, temperatures topping 50C in Pakistan, hundreds killed by a heatwave in British Columbia, deadly floods in Germany and China. All within a single month. Add to that the recent dire warning from the Met Office that the age of extreme weather has just begun.

The wake-up call that this offers is not just the obvious one: that climate breakdown is already here. It also illustrates that we, in this generation, are in a unique position in the history of this crisis. Climate breakdown can no longer be plausibly denied as a threat etched only in the future. And all too soon, avoiding it may be a luxury lost to the past. The window to avoid catastrophe is closing with every passing day. We’re in the decisive decade in this fight, and we must treat the climate crisis as an issue that stands alone in the combination of its urgency and the shadow it casts over future generations.

The actions we take defy the normal rhythm of political cycles. What we do in the next few years will have effects for hundreds of years to come. Unless the world cuts emissions in half in this decade, we will probably lose the chance to avoid warming of significantly more than the 1.5C set out in the 2015 Paris accord. We have seen the catastrophic effects of a world warmed by just 1.2C. What happens if we get to 2.5 or 3C? By then, we’ll look back at recent summers as not the hottest we’ve ever had but, in all likelihood, the coolest we will ever have again.

The accompanying truth is that our biggest enemy is no longer climate denial but climate delay. The most dangerous opponents of change are no longer the shrinking minority who deny the need for action, but the supposed supporters of change who refuse to act at the pace the science demands. As Bill McKibben, environmentalist and climate scholar, says on climate: “Winning slowly is the same as losing.”

The UK government is a case in point. There is a chasm between the boosterish rhetoric of the Johnson government and the reality. We are way off meeting our climate targets, which are themselves insufficiently ambitious, graded “somewhere below” 4 out of 10 for delivery by the Climate Change Committee. Nothing is more dangerous than the mirage of action shrouding the truth of inaction, because it breeds either false confidence that we will be OK or cynicism and despair about meaningless political promises.

But why are they failing? Above all, because of a dogged refusal to put government investment at scale behind a green recovery. The more government refuses to provide that proper plan and finance, the harder the decisions on boilers, cars and industrial transition become. A government that absents its responsibility for making these transitions is a government that will fail to make them happen.

This is not simply failing to protect us from the biggest long-term threat we face; it’s economically illiterate too.

The case for investing now is not just clear as a question of intergenerational equity, it’s also the only conclusion to draw from a hard-headed fiscal analysis of the costs and benefits. The Office for Budget Responsibility tells us that the costs of acting early are surprisingly small relative to our national income – in the central scenario, an average annual investment in net terms of just 0.4% of GDP between now and 2050.

Meanwhile, we know that inaction is entirely unaffordable, leaving massive costs of climate damage racked up and left for future generations. The OBR also tells us that delay will significantly raise the cost of action, in part because we are baking high carbon into our infrastructure. We will have to make the transition at some point; failing to act now will betray our children and grandchildren and will just end up costing more.

We should act now not just because we must avoid future generations living in a disaster movie but because rewriting the script can produce a better world. Rapid decarbonisation is the imperative, but we can do so in a way that fixes the inequalities that exist in our current economic system. This is the promise of the Green New Deal – that this transformative programme of investment can also generate good jobs, help existing industries transition and create new ones, ensure warmer homes, cleaner air, and a lasting shift in wealth and power across our country. This is the vision we must fight for.

Particularly, in this year of all years, what we do here at home has real impacts around the world. If other governments believe that a country that has led the way on climate is full of hot air, it simply undermines trust and lets the big polluters off the hook. In the less than 30 days left to COP26, the prime minister must finally wake up to the fact that this is not a glorified international photo opportunity but a complex and fragile negotiation where he must deliver at home and engage in the hard yards of diplomacy.

Just over 50 years ago, Martin Luther King said of the fight for racial and economic justice: “We are now faced with the fact that tomorrow is today. We are confronted with the fierce urgency of now. In the unfolding conundrum of life and history, there is such a thing as being too late.” As the generation that stands astride the causes and consequences of this climate emergency, we must take heed of those words.

This piece was originally published by The Guardian and is reposted here with permission.